Trying to lose weight is so difficult. I wish it were as easy as swallowing a pill and having your excess fat just melt away. But maybe then everyone would just binge-eat and take those pills and be completely unhealthy. It’s definitely mind over matter but, more often than not, the mind isn’t very good at asserting itself.

Exercise? What’s that? I’ve been seriously lacking in that area. I must go back to that workout program Julio gave me.

I do the cooking in my house and have absolute control over the menu, but there are just so many recipes I want to try out! Our bookshelves are taken up mostly by my cookbooks, with a “healthy” cookbook shoved in here and there. I have been trying to eat much better this week. I consciously have to make an effort to spoon a smaller serving of rice onto my plate and a bigger serving of vegetables. It’s been tough saying no to dessert, and having just one serving if I can’t.

And what do I have to show for it? One pound less. I suppose that’s much better than one pound more! I have four and a half months to lose 24 more. Putting it that way, I have a long way to go!

I’ve lost 3 lbs. since over a month ago, when I said I would eat better and get more exercise.

Have I actually done those things? Not really… I started out pretty well, but I’ve gone back to eating starch and consuming way more junk food and sweets than I normally do. And the exercise part? I’ve done Julio’s workout maybe thrice.

No more excuses, Ynez. Let’s do this right.

Enough said. A month into my attempt at weight loss and I’m back to square 1.

Still just 5 lbs. down. I know it’s not an excuse, but I was feeling pretty sick the first half of the week. Plus Julio was diagnosed with dengue so I was more than a little worried. We were at the hospital every morning from Tuesday to Friday so he could get a complete blood count, and he wasn’t diagnosed with dengue for sure until Thursday. 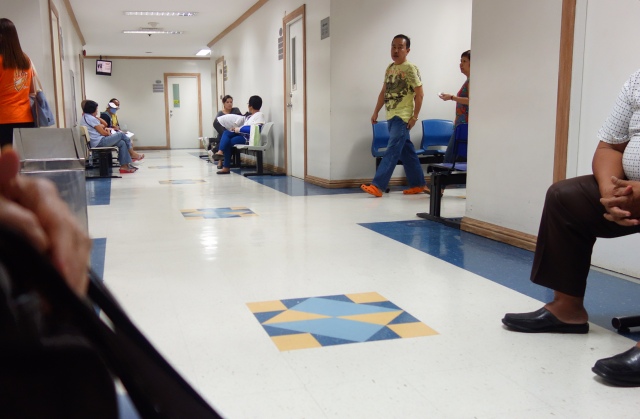 In any case, was I able to work out? Heck no. Did I eat better? I suppose I did but I went back to eating starch Friday. Worst of all, I had instant noodles for lunch today. Hopefully I’ll be able to hold out this week, even with the trip to Baguio!

I’ve fallen off the wagon and gone back to my pre-diet weight.

That’s right – I gained back the 4 lbs. I lost. Make that 5 lbs., because I lost another pound sometime at the beginning of the week. Then the weekend rolled around and I gained it ALL back. I must admit, I have not exactly been eating healthily nor have I been sticking to my self-imposed one serving rule.

Bugger. I can’t believe I gained 5 lbs. in the span of just as many days! I started the week properly but began eating junk food and other no-nos by Wednesday. I did work out twice this week, so yay for me on that end. I even had a little workout partner!

Bea has her own kettlebell (given to her by one of Julio’s friends) but, don’t worry, she is not yet allowed to even carry it.

I do have to give myself a slap on the wrist for cheating (a lot!) this week. I had cake and donuts and dessert and lots of starch. Bad Ynez.

So I promise to do much better this week. More veg and NO cheating at all, since I cheated almost every day last week. Let’s just keep the McDonalds double cheeseburger and fries I had for lunch yesterday a secret, deal? Just between you and me though, that meal was not at all worth it.

A week’s gone by since I started my diet. I lost 4 lbs. within 4 days but my weight’s plateaued since then.

What have I been doing differently? Not eating starch, for one. For someone who is used to having rice or pasta or bread or potatoes with every meal, it’s been easier than I thought it would be. I’ve cheated (quite a lot!) and had a teeny slice of cake for dessert or just one piece of chocolate, or even an Oreo, but generally I’m right on track. I haven’t been cooking with salt. I’ve also been eating things like this lentil dish. It was pretty tasteless, and on hindsight I should have probably used dried lentils instead of canned. 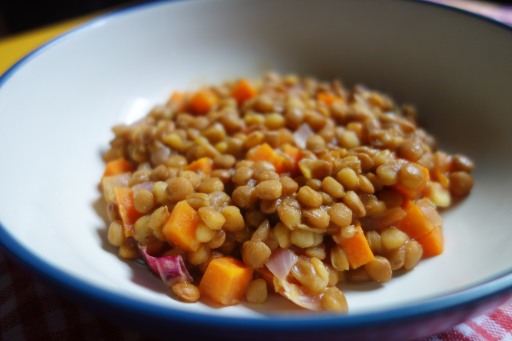 Or this corned beef and bean concoction with fried egg for breakfast. I know it doesn’t look appetizing, but it’s pretty darned good. After eliminating salt from our food, this one seemed a bit too salty. But it was good enough to wolf down anyway.

I know, I know. I said we were going to go on a Paleo diet. And legumes, apparently, aren’t on the list of Paleo food. But we were going the Slow-Carb route too, and I had loaded my pantry shelf with cans of beans. Julio said to just use up the stock of canned beans we have then go Paleo as much as possible. I love beans. I think I was okay giving up the starch because I could have beans. But now, no starch and no beans? We’ll see how that goes.

What else have I been up to? I’ve also done some exercise. Not much, mind you. Just twice since I started the weight loss program. We took Bea to U.P. to practice riding her Strider bike, and Julio watched her while I took a 30-minute walk.

In my first post in the 30 Off! series, I mentioned that Julio created a workout program for me. I’m supposed to do it twice a week for 2 weeks, then increase the number of workout days. In the one week since I started the diet, I’ve only done it once. And it was tough! It consists of swinging a 10-kg kettlebell and doing squats. My legs and arms were pretty much Jello by the time I was done. And my butt ached the next day. Still, I suppose I might as well stick to the regimen if it’s going to help me lose weight faster. Although I’m sure the cheat weekend didn’t do my body any favors.

As mentioned in a previous post, my husband and I started the Paleo/Slow-Carb diet last week and we were pretty good about it. However, my sister got married this week and for 3 days we ate like pigs. I stepped on a weighing scale last night (at Julio’s insistence) and was shocked to see that I now weigh 130 lbs. Holy moly. This is the heaviest I’ve ever been, and I actually teared up when I got off that cursed thing. For my height, I should weigh 100 lbs. Now I haven’t been that light since I was in high school some 15 years ago. But this is just insane! And I suppose, being married to a strength and conditioning coach, I should be more physically fit than I am. I was looking at photos of me taken at the wedding and I must say, I could definitely stand to lose weight.

I was joking around and saying my necklace was so tight that it would snap if I flexed. After seeing pictures, I realize just how true that was!

We talked about it, and I said I’d like to lose 30 lbs. I was going to say 10 lbs., to make it easier, but Julio said that I’ll have to work just as hard as I would trying to lose more weight. Then he asked me what my goal was, time-wise. I was going to say 3 months but that might be too ambitious so I said 6 months. 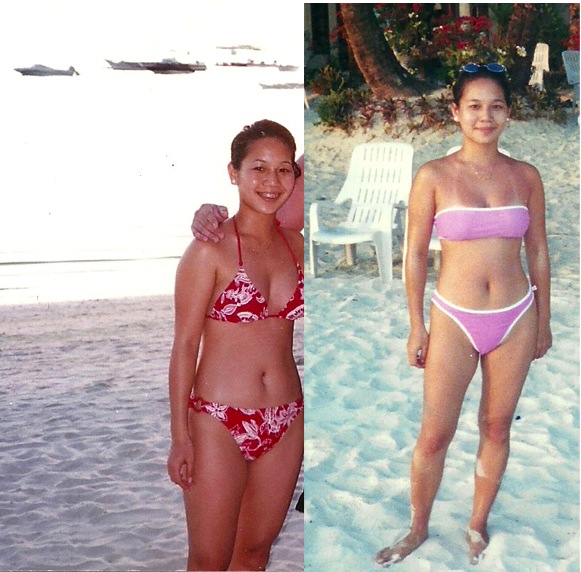 So today, I’m going to start a new weekly blog series called 30 Off! This will document my success (or failure) at weight-loss. I figure, if I write about it for everyone to see then that should be additional motivation for me to work at it. We’re going to do a combination of the Paleo and Slow-Carb diets,  which I suppose just means no carbs, no sweets, and no salt. To understand it fully, my husband is going to do more reading up on it and will just give me the dummy version – what’s allowed and what isn’t. Julio has also made a program for me to start on Monday, and wants me to make a daily food log. Hopefully I can do this!

I hope you enjoy reading about my life as a wife and mother, keeping house, DIY-ing, and staying sane!

House and lot for sale in Marikina

Close to schools and major thoroughfares

The Art and Craft of Blogging

NO bullshit ideas, tips and advice on training and anything under the sun

The latest news on WordPress.com and the WordPress community.